Well, I am home sick today. The good news is, I have time to catch up on my blog. I have been intending to write a blog this week, but time has not allowed. Have you ever had one of those weeks where you have gone non stop? That has been me this week. That is probably why I am sick....


I am sure many of you are on Pinterest! I for one love Pinterest! My sister told me about it several months back. I don't have Facebook, so I am always the last to know about the latest "thing". Anyways, I am hooked! I find it to be so helpful and resourceful. My husband and I are in in the middle of moving to a new house, so I have been on Pinterest even more lately finding decorating ideas and DIY projects for the home. My mind has gone crazy with all the possibilities. I do have to admit, that I pin projects way more than I actually complete them, but I guess that is part of the fun! I have been a little sad this year, because I have seen so many fun Christmas decorating ideas. This year I am not decorating for Christmas, I am not even putting up a tree! Can you believe that?! I LOVE Christmas but with being in the middle of moving, it just wasn't worth it to put it all up to only have to take it down in a few weeks. Next year I will be pinning Christmas ideas for sure! I would like to share some of the fun projects I have completed off of Pinterest. I would also like to share some of the fun ideas that I hope to complete in the next few months!

These are the projects that I have completed. These aren't the actual pictures of my projects. I would have like to share the pictures of the ones that I have done but some of them are in boxes...


1. I have an obsession with mason jars! I love that you can take a simple jar and do so many different projects with them. mason jars can be pricey. Thankfully, my mother-in-law was given a ton, so I was able to use some of those. Here are a couple of projects I have done with mason jars.

A. I took two mason jars and used curtain rod brackets to mount them on the wall. I put flowers in mine. I like this idea, because you can switch out the flowers for each season.

B. This is basically the same idea as above, but you get an old metal milk crate, put mason jars in the crate and add flower, candles or whatever else that makes you happy. 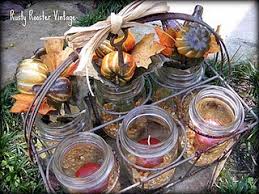 2. I was sick of always having mail on my dining room table, I saw this idea on Pinterest and knew I had to make it. My parents were in the middle of remodeling there house. I knew that they had some old shutters laying around. They were just going to throw them away, so I grabbed them. All it took was a little spray paint to spruce the shutters up. This is also a fun gift idea if you are needing any ideas this Christmas. You can even personalize it by tinseling your name on top of the shutter. Super easy and fun!

3. I was looking for a way to decorate my bathroom. I stumbled across this idea on Pinterest. Unfortunately, I did not have any scraps lying around, so this project did cost me some money. However, I found ways to keep the cost down. I bought an old picture frame from Good Will. I bought my scrap paper from Hobby Lobby and the sheet metal from Home Depot. (The most expensive item was the sheet metal). I found a piece that was a little damaged, so they took some money off. There are always ways to save, you just have to be inventive. This project serves as wall decor and a makeup holder.

4. This seems to be a pretty popular thing these days, taking old windows and putting pictures in it. I love this idea. What a creative way to display photos. My sister-in-law, Julie, and I were yard saling one morning. We found two old windows for $5 dollars a piece. Not too bad. This was another inexpensive project.

I have also made several new recipes off of Pinterest. I always feel that I make the same things over and over. I love being able to change things up, and Pinterest allows me to do so.


Here are some of my future projects that I plan on completing.

What are some things that you have made off of Pinterest? I would love to know!

Have a great weekend!

I would like to share with you about a hair product that my hair stylist recently told me about! It is SUPER INEXPENSIVE! You can find it at your local Walmart. It costs a little less than two dollars. I, like most women, love to get my hair done. I like to experiment with different colors, but with that, comes DAMAGE! A couple of months a go, my hair stylist, Lydia, told me about this product called Cholesterol. I recently started going to her. Normally, when I would get my hair done before, my stylist would try to sell me products that they sold in the store, which can be a little pricey. I was shocked when my new stylist told me about a product that was not sold in her store and was so inexpensive. She told me how she uses it and how amazing it is. After I left that appointment, I went and picked me up a jar. I have been using it for  about two months now, and I LOVE IT! It has made my hair stronger and shinier. I thought that I would share the love with you today! I encourage you to try it, you won't be disappointed. Cholesterol is basically fat, which is pretty gross. However, it does wonders. I use it about twice a week. After you shampoo your hair, apply cholesterol and let it sit for about 5 minutes, then rinse. I could tell a difference after the first time using it. Below is a picture, so you will know what to look for. I have only looked at Walmart, but I am sure that other stores sell it. If you have any questions, just ask! 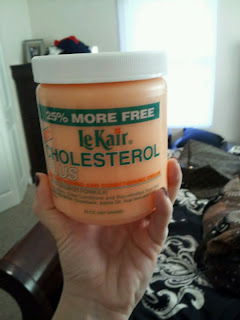 A Bundle of Fun
My name is Casey! Thanks for stopping by! I hope that you find my blog to be helpful and resourceful. Here, at a Bundle of Fun, you will find topics on DIY projects,recipes, faith, family, helpful tips and items that I find handy. A few fun facts about me: I'm Jesus' loving gal, I have been married for 4 years to my wonderful husband, Michael, Diet Coke junkie, dog lover, yard sale enthusiast and a DIY wanna be!